Held in Manhattan, the New York Television Festival is the flagship event of the NYTVF calendar. During the week of the Festival, the NYTVF hosts thousands of artists, industry leaders, and TV fans for a week of screenings, panels, premieres, and more.

NYTVF Primetime brings audiences red-carpet, star-studded debuts of the hottest new and returning shows and intimate conversations with the artists who create them.

To view photos of past NYTVF Primetime events, visit the NYTVF flickr page.

To view the Official Selections in the IPC, visit the IPC page.

Development Day is one of the largest panel series of the week, devoted to exploring development both in online and traditional markets. The NYTVF Panel Series also includes fan-led panels and Keynote Conversations with the most influential names in television (including Arrested Development creator Mitch Hurwitz, How I Met Your Mother creators Carter Bays and Craig Thomas, and GIRLS creator and star Lena Dunham and showrunner Jenni Konner). 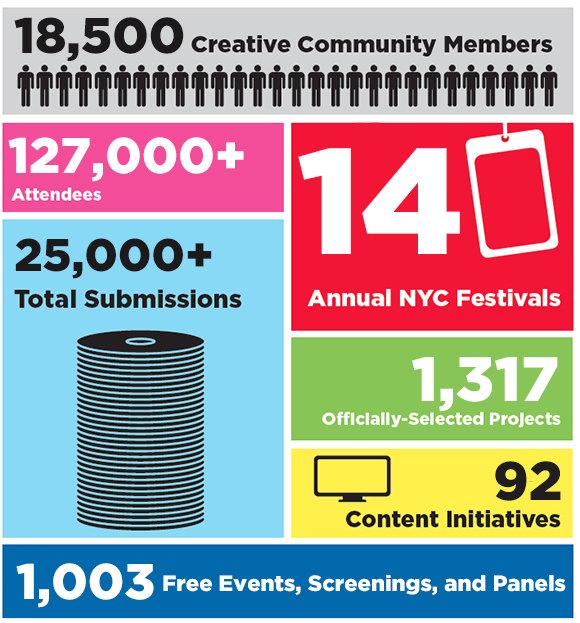 “NYTVF is the best networking and showcase opportunity I have ever experienced as a filmmaker. Many fests promise meetings with production companies and networks - the difference is that NYTVF delivers and delivers in spades. NYTVF is single-handedly changing TV.”

The NYTVF also hosts a slate of events open exclusively to Official Artists and Partners. This program, collectively called NYTVF Connect, gives Official Artists and industry members premier access to one another in a collaborative environment. NYTVF Connect enables attendees to network, learn, and form relationships through development discussions, networking mixers, and meetings held at the Festival.

Get more information on NYTVF Connect.

To become involved at the industry level, visit our main Industry Page.

"Attend as many panels as possible. Writing for TV is a specific art and I learned more of the tricks while attending panels. [The NYTVF] exposed me to development and the industry side of the business in a clear and comfortable way. "

"I have never been part of a festival so well run with the amount of opportunities it had for participating artists. Just being in the room with fellow creators, industry professionals and lovers of television was inspiring."

"The NYTVF provides a wonderful opportunity to network with industry decision-makers, as well as other talented writers, producers and directors. Coming from the feature film world, it was a fantastic education on how the TV industry works, and we made some valuable industry contacts with whom we are pursuing further projects."

"If you're considering submitting, stop considering and just make your show. Even if it's not perfect, you'll learn so much during the process that your next project will be that much richer for it. And if you get into the festival and get to screen your project in front of an audience, that's a terrific bonus."