The NYTVF is pleased to announce the sixteen finalists in the A+E 360° Unscripted Pipeline, where A&E, HISTORY, and Lifetime invited unscripted producers to submit character-based sizzle tapes and series treatments for new unscripted show concepts. Each network will offer $5,000 and a potential development opportunity to a selected producer to be announced at the Festival in October.

Additionally, the finalists have the opportunity to participate in the 2015 New York Television Festival as Official Artists.

Congratulations to all the finalists, and thank you to everyone who submitted! 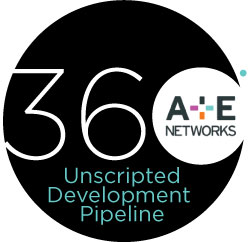 A&E, HISTORY, and Lifetime are returning to the 2015 New York Television Festival in search of new, bold, unscripted show concepts and out-of-this-world characters.

The A+E Networks 360° Unscripted Development Pipeline is seeking character tapes and sizzle reels from independent producers and production companies, with each network offering at least one producer a potential development deal to further develop their concept with the corresponding network.

A screening committee of NYTVF officials will narrow the pool of entrants down to a selection of finalists for review by the participating networks, who will identify projects of interest for meetings during the 2015 New York Television Festival. Each network will select one winner to receive $5,000 and the opportunity to further develop their concept at A+E Networks.

All finalists in the 360° Unscripted Development Pipeline will receive designation as 2015 NYTVF Official Artists and an exclusive invitation to participate in the 11th annual New York Television Festival, held in NYC in October.

This competition is FREE to enter.

Use the links below to explore the various aspects of submitting to the 360 Unscripted Pipeline.

From the hilarious antics of "Duck Dynasty" and "Country Bucks" to the gritty tension of "The First 48" and the entrepreneurial strategy and family hijinks of "Wahlburgers," A&E is the destination for real, character driven stories. Our mission is to find innovative nonfiction programming with the elements our viewers come to expect --- high stakes, authentic, unexpected.

For this initiative, we want you to introduce us to a world that is original, new, and full of life. Don't merely show us the great characters that you uncover, but take us into their lives. What makes this concept fresh, and appealing? How are your characters connected and in what ways do they interact? Also, don't feel pressured to merely look at concepts that are similar to what is on our air now − after all, we already have it! A&E has long been a home for outstanding television, and we think you might be able to uncover the next big thing.

About A&E: Now reaching more than 96 million homes, A&E is the home to quality original content that inspires and challenges audiences to BE ORIGINAL. A&E offers a diverse mix of uniquely immersive entertainment ranging from the network’s original scripted series, including “Bates Motel” and “Damien” to signature non-fiction franchises, including “Duck Dynasty,” “Wahlburgers” and “Storage Wars.”

HISTORY is the leading destination for award-winning original series and specials that connect viewers with history in an informative, immersive, and entertaining manner. As a leader, we must be BIG, NEW and RELEVANT with our hit programming. The purpose of this NYTVF initiative is to introduce HISTORY to the next generation of emerging producers and storytellers who have found larger-than-life male characters in exciting aspirational worlds. These characters should be bold, unique and credible experts who are surrounded by a rich world and can show their expertise through interesting process. Make sure the audience can come away with great takeaway information that provides a new surprising look at History. We've done it before with shows like Pawn Stars, American Pickers, Ice Road Truckers, and Ancient Aliens. What's next?

Lifetime is the #1 destination for fun, surprising and diverse female unscripted shows. From Bring it! to Dance Moms and Little Women, we make shows with unforgettable characters that are well-produced, ground-breaking and entertaining.

We know that for a new Lifetime show to succeed, it helps to have four essential ingredients: it's set in a surprising space or has a surprising character; it has heart, humor AND edge; it often has a heroine who is smart, sassy and loud; and most importantly it’s able to generate enough noise to break through the clutter of the crowded female space.

Use the following as guidelines only. If there is a show you think we should look at but doesn't fit here, pitch it anyway. We appreciate that and more often the ideas "that are not right for Lifetime" or that you're pitching elsewhere are the ones that we respond to most. We've seen it all and nothing scares us. Don't worry about making us feel uncomfortable or shy away from something a little controversial. Those are usually the ideas that have a shot at being a hit. We like to take big swings.

If you're submitting a casting reel it should showcase your lead character, any supporting cast and include a clear, concise description of what they do and why people will want to come back week after week to watch them. We are looking for worlds and characters that can sustain a series, not simply a "one off."

Technical and production savvy is helpful by not required - the most important element is capturing the "wow" factor in your subject(s) - even if it's by Skype chat.

While we are open to new and surprising ideas, there are some sub-genres that we aren't interested in - LAW ENFORCEMENT, TOUCHY-FEELY SPIRITUAL HEALERS, BURLESQUE, "FRINGE" SIDE SHOW CHARACTERS, "WOMEN IN MAN'S WORLD," BIKERS. GHOST HUNTERS, WEDDINGS, LIFE COACHES, THERAPISTS, BAKING, “DO-GOODERS.”

About Lifetime Unscripted:
Lifetime is the premier female-focused network with one television’s largest slates of original programming, including a critically-acclaimed portfolio of movies, hit scripted series and best-in-class reality programs.  Leading Lifetime's unscripted slate is its hit Little Women franchise, including Little Women: LA, Little Women: NY and Little Women: Terra’s Little Family, Emmy® Award-nominated Project Runway, as well as Project Runway All Stars and all-new Project Runway Junior, the hit docusoaps Bring It! and Dance Moms, Child Genius and the upcoming program Sing It! (wt), among others.  For more information on our company and programming, please visit Mylifetime.com.

All submissions, accompanied by a signed Application Form, must be sent to: